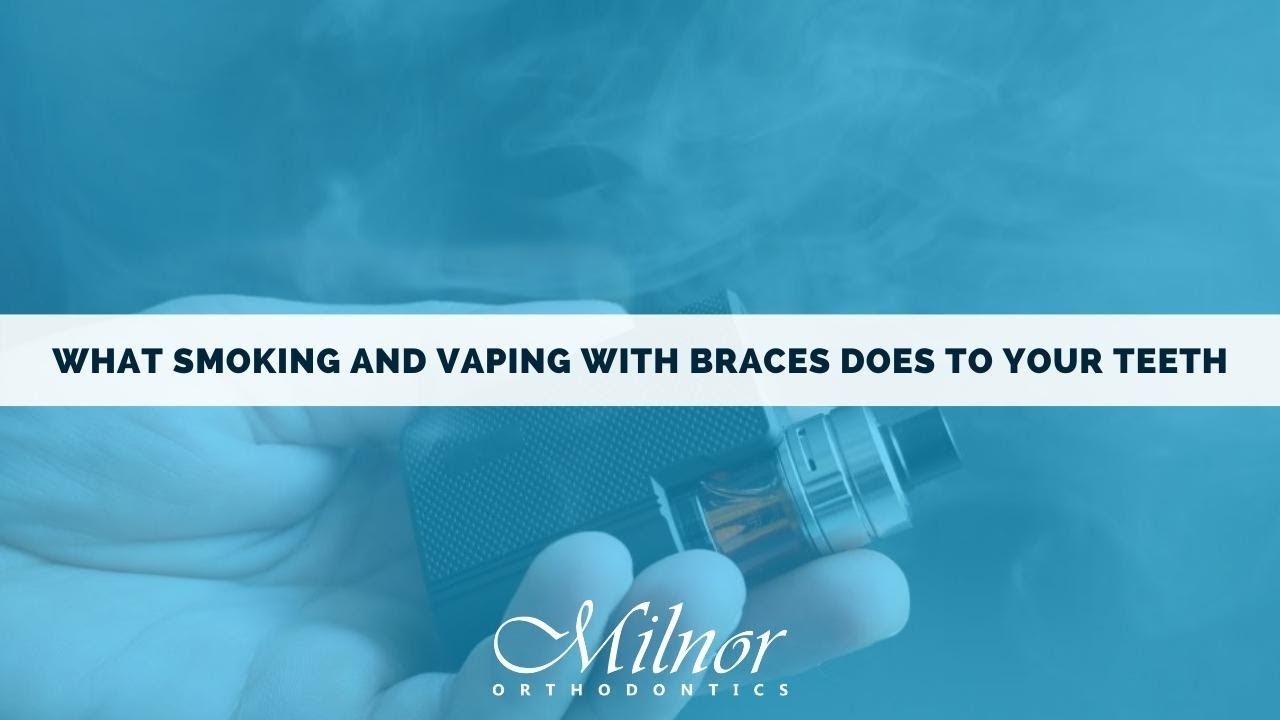 What Smoking and Vaping with Braces Does to Your Teeth

If you are thinking about starting orthodontic treatment, odds are you also care about keeping your teeth healthy. One important health concern when it comes to teeth is smoking and vaping with braces. Here’s how this habit can affect your smile, both in terms of appearances and underlying health concerns.

Smoking and Vaping with Braces

Studies have shown that smokers are prone to having higher levels of bacteria in their mouth, specifically on the teeth and gums. This unhealthy bacteria buildup can lead to a number of oral health problems, including tooth decay and gum disease.

Some of this bacterial buildup can be linked to instances of dryness in the mouth. Normally, your saliva helps get rid of some bacteria buildup. But with reduced levels of saliva due to smoking, you are more vulnerable to bacterial accumulation.

Bacteria is what causes plaque buildup on the surface of your teeth and in between them. When you’re wearing braces, plaque is especially important to pay attention to as it is harder to clean between the brackets and wires. Increased plaque and tartar buildup can cause several issues with your braces. When your braces are removed, they won’t be smooth but have the tartar build up around where your brackets were before. Tobacco-related plaque buildup can also increase the appearance of stains, which many people will have even if they don’t smoke or vape.

Smoking and vaping have also been shown to increase inflammation in the gums due to reduced blood flow and irritation. Also, as bacteria build up in crevices around the gums, you become more vulnerable to gum disease, which leads to even worse gum inflammation. As gum disease progresses, it can escalate to the point where your gums start to recede and separate from the teeth. This can lead to some teeth needing to be extracted.

Gum disease can progress rapidly once it begins, so it is imperative that you do your best to keep your gums healthy during orthodontic treatment. If your condition has reached what is called periodontitis, it could require surgery to address. Many people with advanced gum disease are left with no other option than to receive tissue and bone grafts or tissue regeneration. Your gums are already going to be more sensitive during orthodontic treatment, and smoking and vaping will heavily increase your risk for gum disease.

Another way smoking directly causes problems with your teeth involves your cells. Smoking and vaping are both linked to cell death in the gums and bone structures, effectively weakening your tissue and your teeth. So not only will your teeth be dealing with increased bacteria as a result of smoking, but they will also be weaker at the same time.

Throughout your treatment, whether you’re wearing braces or Invisalign, your entire mouth will encounter a new sort of pressure. Your teeth are moving, alignment is shifting, and your gums and cheeks will need to get used to your new gear. If you’re smoking and vaping, cells will die and your mouth’s structures won’t have the same strength to withstand orthodontic treatment. Don’t add extra pressure to your teeth and gums by smoking and vaping, they’ll have enough going on already.

While a relatively minor consequence in comparison to gum disease and tooth decay, one major concern with smoking or vaping is teeth-staining. People who smoke or vape often find that their teeth become yellow over time and can even turn a brown color. If you smoke while in braces, you could find starkly different tones on your teeth when you get your braces removed.

It’s hard enough to keep up on oral hygiene when you aren’t undergoing orthodontic treatment. Once you’re wearing braces or clear aligners, you’ll have to develop a new oral health routine. If you’re smoking or vaping during treatment, you’re creating extra worry for yourself in the long run. You won’t be able to effectively whiten your teeth while wearing braces, so there will be double the staining to address once they come off. Think of your future self and ask if you’re doing them any favors by vaping while wearing braces.

Smoking and Vaping with Invisalign

Smoking and vaping with Invisalign comes with some of the same issues as metal braces, but have unique consequences of their own. Your gums, teeth, and cells will all still be damaged by using tobacco products, but now your clear aligners themselves will be irreversibly affected in the process.

When you’re smoking while wearing your Invisalign trays, you’re adding heat to the plastic trays and risk melting them. If you deform your trays with heat in any way, they could impact the success of your orthodontic treatment overtime. Once trays are melted, there is no way to restore them and you’ll have to pay for another set. You’re wasting time and money by wearing your Invisalign aligners and smoking (not to mention risking your health).

Smoking and vaping with your Invisalign trays on can cause the clear appearance to become yellow or brown. There is a possibility that the impact of tobacco use on your clear trays is even more perceptible than it would be on your actual teeth. Your teeth underneath your trays could actually be whiter, but the plastic aligners will make your teeth appear yellower while wearing them.

While vaping is sometimes considered to be a safer “alternative” to smoking cigarettes, there are still plenty of health concerns. Both forms of smoking involve tobacco and nicotine and can be addictive. There are also concerns about chemicals of certain vape flavors, not to mention the occasional occurrence of e-cigarettes exploding. Overall, current research seems to point to e-cigarettes being slightly less harmful than conventional cigarettes, although they are definitely not recommended due to health concerns.

Smoking is a complex issue due to its addictive nature, which can make quitting difficult. Overall, smoking is highly discouraged for patients who want healthy teeth and who want to stay healthy overall.

During your initial consultation here at Milnor Orthodontics, we can answer your questions about how smoking affects your teeth and go over your options for improving your smile. Contact us today!